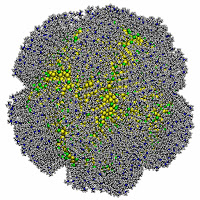 There are many ways to interrogate molecular phenomenon. You might think that this is restricted to physical measurements such as direct observation with a microscope, a laser, or more seemingly arcane observation with nuclear magnetic resonance (NMR). But I’m happy to report that observation of computer simulations is yet another, as long as our models are sufficiently accurate that they mimic reality perfectly. In today’s age when it’s hard to see the difference between CGI and real humans, this may not sound surprising. Nevertheless, the question is what can we learn from observation of real and simulated systems in tandem?

I’m happy to report that my student Gene Chong and Cathy Murphy’s student Meng Wu did precisely this parallel study. Gene made simulations of a simpler system, involving nanoparticles covered by lipids called MUTABs. Meng made NMR measurements of nanoparticles covered by a similar but somewhat longer lipids called MTABs. (Note that if you are worried about the term nuclear in NMR, as in nuclear energy, don’t be. We are just looking at the positions of the nuclei, not spitting them apart. It was the concern over this misunderstanding that led to the use of such a device to look at your body in detail to be called MRI instead of NMR!) The happy result was that the two observations agreed. But only together did Meng’s and Gene’s observations show clearly that the lipids didn’t always cover the nanoparticle smoothly like melted chocolate on ice cream, but rather assembled like sprinkles all pointing out in the same direction packed together in different islands on the surface. This structure means that lipid-decorated nanoparticles will have shape and response to other systems that you might not otherwise anticipate. And this opens the question to our next set of investigations as we chart a course to understand the interactions between nanoparticles and biological components such as membranes.

If you want more detail, check out our article in JACS, just recently published!  That is, JACS 141, 4316 (2019), and I'm happy to report that it was funded by the NSF CCI program for our Center for Sustainable Nanotechnology.

Posted by Rigoberto Hernandez at 7:00 PM