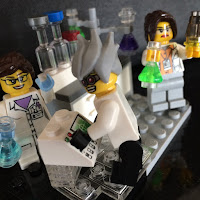 The birth control pill turned 50 recently, and it was a reminder of the great power of a chemical compound, estrogen, to affect social and political change. A little less attention was given to the role that estrogen levels in our water streams have had on fish in water streams. (See for example, a Scientific American article from 2009 on the possible implications of estrogen in waterways. ) There’s some debate as to where the leading sources of estrogen come from. While most studies indicate that the birth control pill is not the major contributor to its presence in the waterways, there is no doubt that estrogen pollution exists. Regardless, when the birth control pill was introduced, I suspect that few even considered the possibility that estrogen would be a factor in the health of fish in waterways such as the Potomac and Shenandoah rivers.

In this century, there is little doubt that nanoparticles comprise a class of chemical compounds that are revolutionizing nearly everything that we touch, see or smell. Indeed, I am tempted to argue that this century might be called the “nanoparticle age” in the same way that history named the last century as the “industrial age.” The challenge to chemists (and material scientists) is not just designing nanoparticles to solve particular problems, but to do so with materials that have no unintended consequences. Anticipating such unknown unknowns is a grand challenge, and the solution requires a team of scientists with expertise in making, measuring, and modeling the nanoparticles in the upstream design side and in biology and ecology on the downstream side. The Center for Sustainable Nanotechnology (CSN) is taking this challenge head-on. I’m happy and exited to say that I have joined the CSN as part of the modeling team!

Please also check out the announcement of the start of the 5-year effort of the CSN through an NSF CCI Phase II grant CHE-1503408.
Posted by Rigoberto Hernandez at 11:00 AM 3 comments:

May the ducks quack for you (A Tip for Conference Organizers) 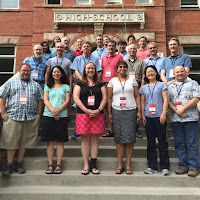 Every two years since 2001, I have been co-organizing a workshop in Telluride on “Chemical Dynamics in Complex Environments” (Chem-DiCE). It's a great venue that attracts scientists (and their families) to attend and return. In our particular workshop, we focus on challenges to address molecular behavior (such as reactions) occurring in solvents that are heterogeneous and far from equilibrium. It turns out that this problem is common to many different chemical phenomenon. We therefore invite researchers that are are facing this challenge in different milieu, such as colloidal dispersions, renewable energy generation, proteins, and confined liquids.  We also aim to split the participants equally across theory/computing and experiment. For many of our participants, this meeting is the only time they see each other, let alone be exposed deeply to the research in their respective fields. The net effect is that our workshop gives rise to a cross-pollination of ideas and solutions across broad areas of research. I'd like to think that this is the main reason for the success of our workshop.

However, perhaps the real reason for our success is the organization structure:  Everyone who speaks gets an hour. That is, exactly an hour. At that point the ducks quack (on our timer), and the speaker is finished. It’s not uncommon for speakers to go through only one-quarter to one-third of the material they prepared. That’s because the audience is so interactive that many questions come to the surface, allowing us all to probe the material that is covered much more deeply. It also allows for consideration of questions or issues that someone from outside of a field might naively ask but which, in running counter to the established dogma, requires a profound new direction or solution to address. No speaker ever gets to the end, and they are invariably unhappy that they were unable to do so. But everyone is happy that all the other speakers are stopped at exactly an hour. In the eight workshops that we have run so far, only once was someone allowed to speak beyond that hour. In that case, the speaker wanted to answer a question that had been raised as the ducks were quacking. He pleaded to continue, and I concurred only after the entire group voted unanimously in favor. Thus the structure of talks is very egalitarian, and provides an opportunity for all to learn something new. That’s why I think that my colleagues keep coming back!