Suppose that you were trying to get across a floor that goes side to side like a wave goes up and down. If you started on the start line (call it the reactants), how long would it take you to cross to the finish line (call it the products) on the other side? In earlier work, we found “fixed” structures that could somehow tell you exactly when you were on the reactant and product sides even while the barrier was waving side to side. Just like you and I would avoid getting seasick while riding such a wave, the “fixed” structure has to move, but just not as much as the wave. So the structure of our dividing surface is “fixed” in the sense that our planet is always on the same orbit flying around the sun. This latter analogy can’t be taken too far because we know that our planet is thankfully stable. In the molecular case, the orbit is not stable. We just discovered that the rates at which molecular reactants move away from the dividing surface can be related to the reaction rate between reactant and products in a chemical reaction. (Note that the former rates are called Floquet exponents.) This is a particularly cool advance because we are now able to relate the properties of the moving dividing surface directly to chemical reactions, at least for this one simplified class of reactions.

The work involved a collaboration with Galen Craven from my research group and Thomas Bartsch from Loughborough University. The title of the article is "Communication: Transition state trajectory stability determines barrier crossing rates in chemical reactions induced by time-dependent oscillating fields.” The work was funded by the NSF, and the international partnership (Trans-MI) was funded by the EU People Programme (Marie Curie Actions). It was just released as a Communication at J. Chem. Phys. 141, 041106 (2014). Click on the JCP link to access the article.

When the buffalo roam, do they go over the pass or across the plain? 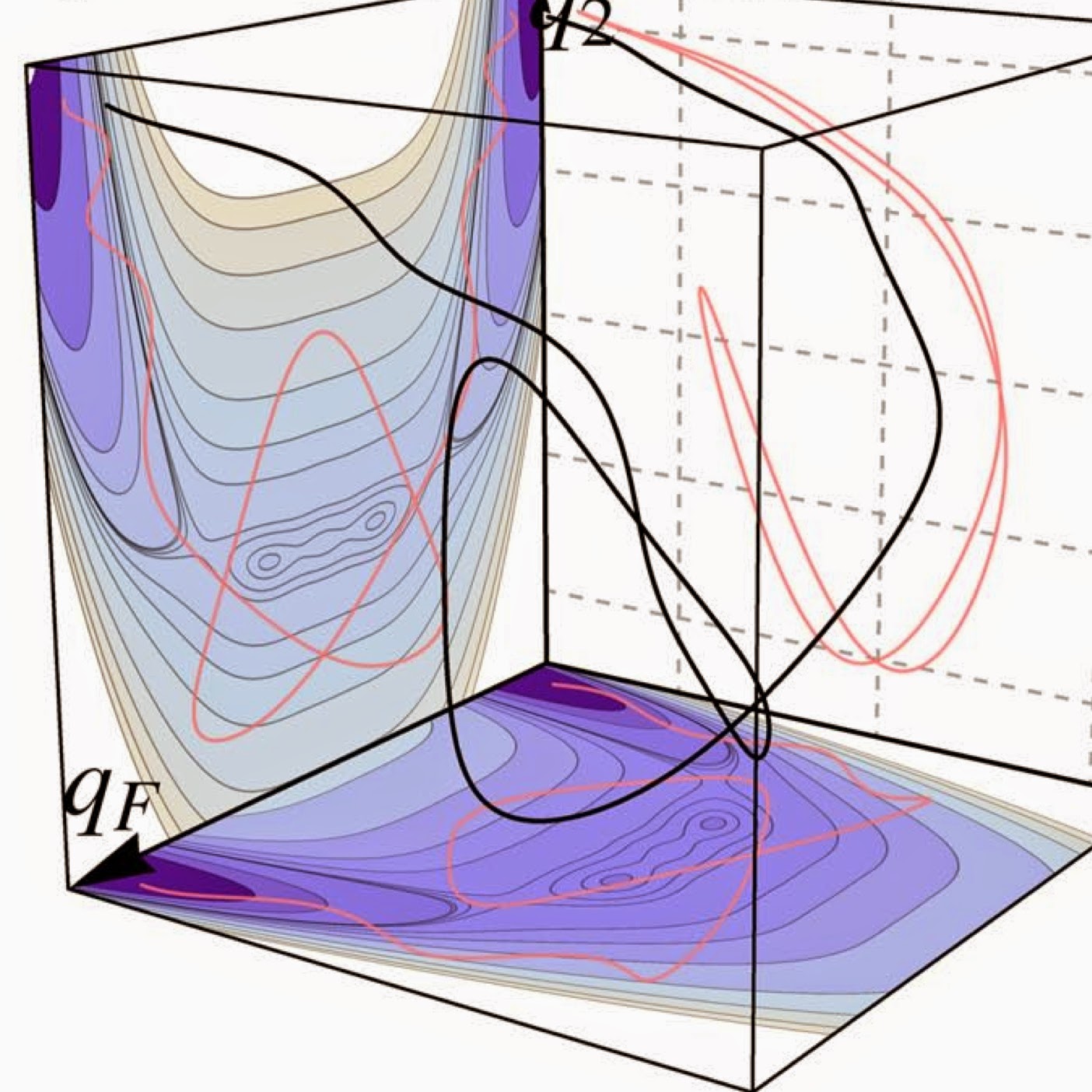 In one of our papers from last year (recapped in an earlier post), we found that in at least one chemical reaction (the ketene isomerization), the reaction could involve rather distinct pathways. On the one hand, the system could go across the break between the two energetic mountains separating the reactant and product. On the other hand, it could find a flat plain in which it could meander slowly across. The first of these two cases involves a narrow pass that is difficult for it to get through. The other is a wide plain but it costs a lot of energy to get up to it. Chemical reaction rate theory is built on the notion that the reaction always goes across the narrow passage as long as it’s the easiest one to get over. However, in the last decade there has been a lot of work observing that roaming over the flat plain has its privileges.

My postdoctoral student, Inga Ulusoy, and I wondered whether the ketene reaction gave rise to both possible classes of paths. It did! We also wondered the degree to which each path affected the rate in which the molecule reacted. We found earlier that the traditional pathway (over the break between the barriers) was the most important one in a model of the reaction with only two degrees of freedom. This led us and others to question whether our result was an accident of the simplicity of our model. In our recent paper, we extended the model to a larger number of degrees of freedom. Interestingly, the main result was the same. Namely, the reacting partners still have the possibility of roaming, but the direct path over the break between the barriers is still the most important one.

The article, "Revisiting roaming trajectories in ketene isomerization at higher dimensionality,” was recently published at Theoretical Chemistry Accounts 133, 1528 (2014). (doi:10.1007/s00214-014-1528-z) The work was supported by the AFOSR. Equally, importantly, it was a real treat to include our work in an issue published in honor of Greg Ezra's 60th birthday. I have followed his work since I was a graduate student, and have learned much from it. While science is immutable, it’s the fact that people are involved in the discovery that makes it humane. And for this reason, it’s particularly fun to be able to contribute to issues that honor the people involved in advancing science. 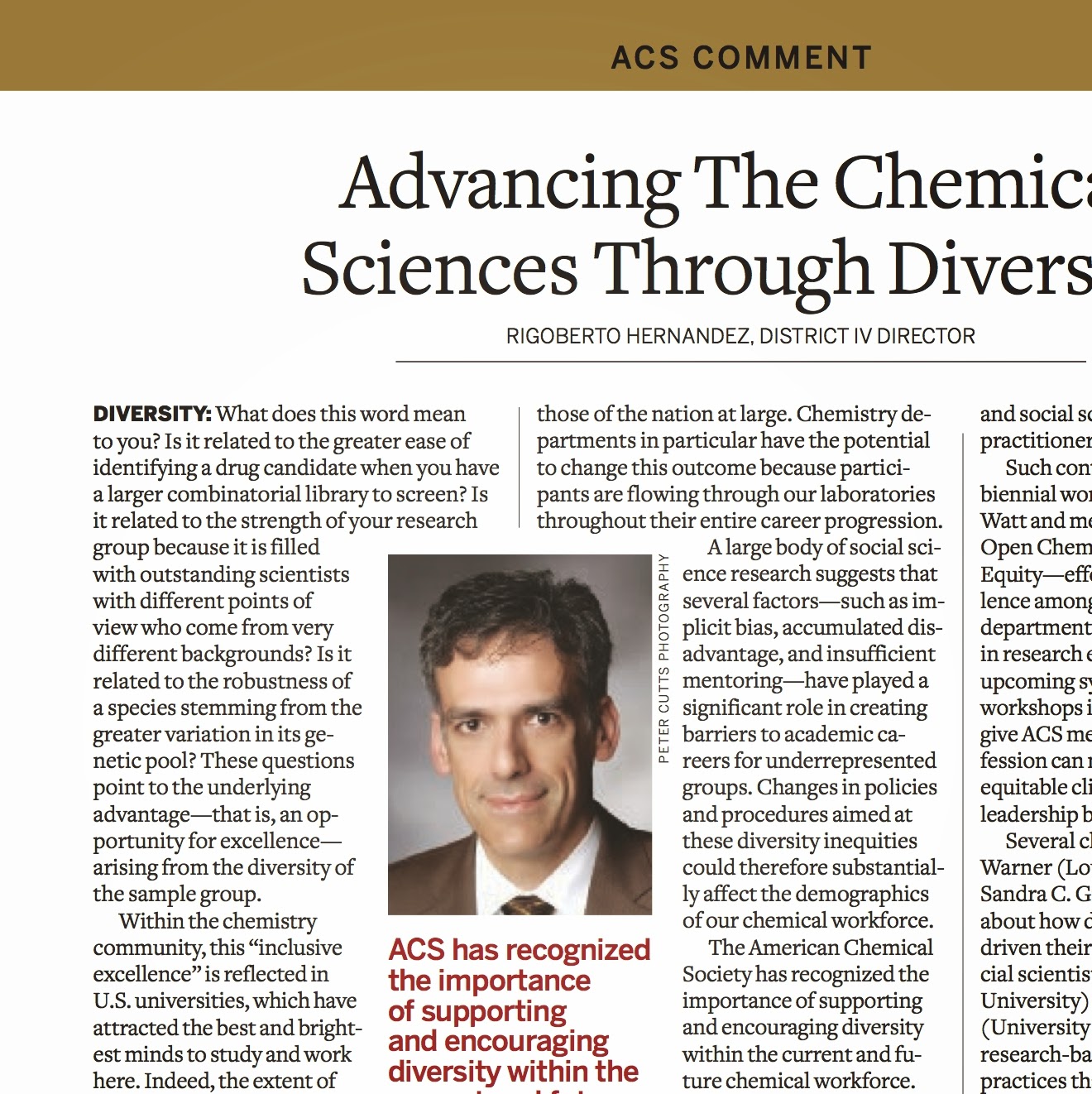 Two qualifiers, successful and diverse, for the research enterprise are inseparable concepts. And yet, some members in the scientific community have often treated them as orthogonal if not outright destructively interfering. (Please forgive my geek speak here!) I think that the only part that is destructive is the failure to be inclusive. Indeed, as we are broadening participation in the chemical research enterprise, we are drawing more and better talent from all over the world and this should include that which is within our borders. Unfortunately, we aren't quite there yet as is visible through the existing imbalance in the demographics between the US population and the chemical workforce. Achieving parity requires us to be actively engaged.

To this end, I just published a Comment in C&EN to advertise the upcoming symposium on "Advancing the Chemical Sciences Through Diversity in Participation." (Earlier, I wrote on this blog about why I publish there and here. You can also check out the ChemDiversity Blog post advertising the symposium.) If you happen to be in San Francisco in mid August, feel free to join us at the Hilton near Union Square. You'll learn a few tips for advancing inclusive excellence and you'll be in the middle of San Francisco. Hard to beat that pairing!

Check out the Comment on page 45 of the July 14, 2014 C&EN at this link. (Apologies if it's closed to ACS members and subscribers only.)

Posted by Rigoberto Hernandez at 1:00 PM No comments:

On my experience delivering a webinar... 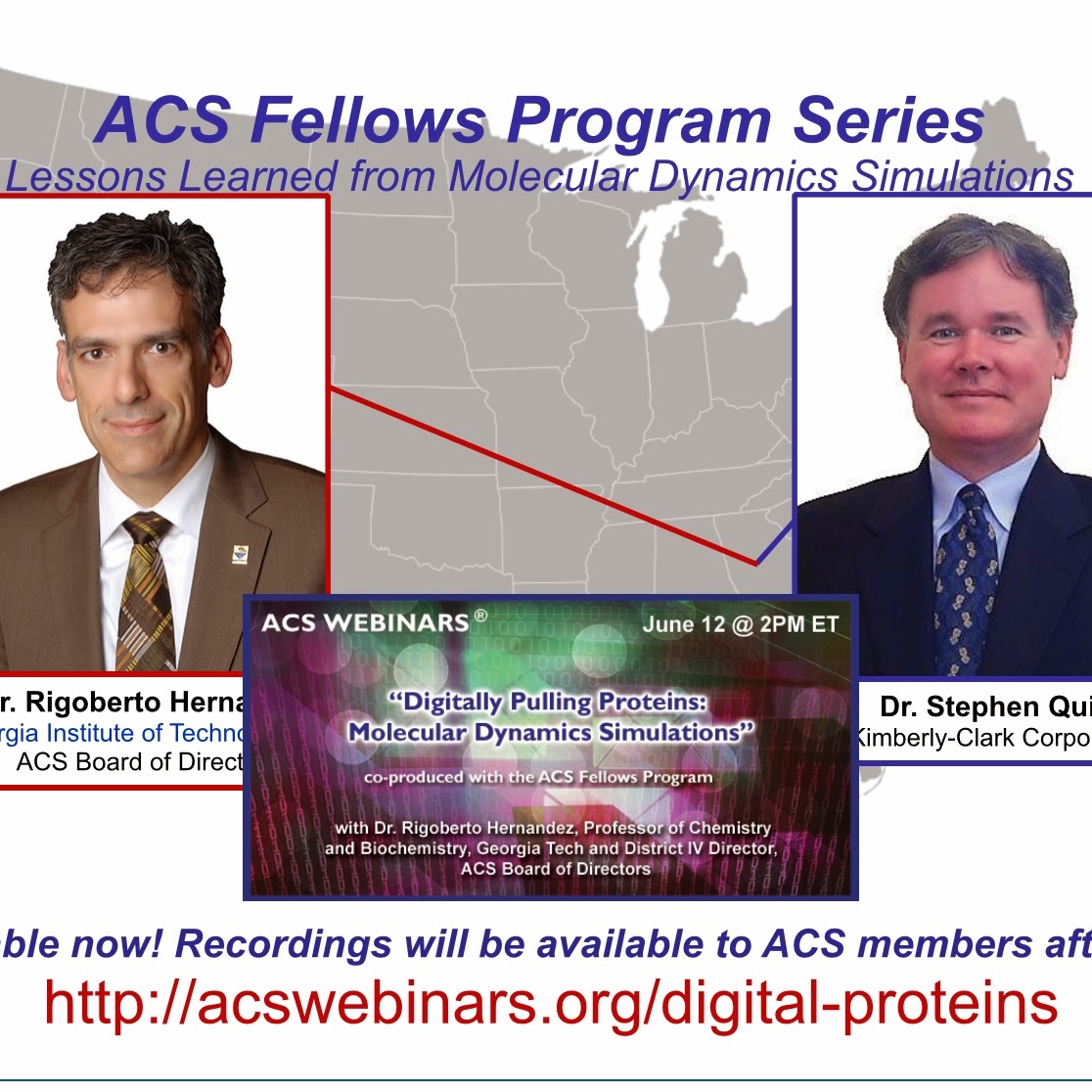 I recently participated as a speaker in a Webinar for the American Chemical Society (ACS.) It was only the second webinar that I have delivered. My first was held on January 2013 as part of the monthly meeting series of the Lehigh Valley Local section of the ACS. They were an early adopter of the medium. That is, they were quick to figure out that it's cost effective to host speakers from a distance while also addressing a greater number of their members. The latter is particularly important to them because they cover a large geographic area placing any particular choice of meeting location too far from most of their members. My host, Lorena Tribe, helped me learn how to use questions through the presentation effectively in order to engage their web audience. I found the technique to be so successful that I have retained and used the questions (in think-pair-share style) as I present our work (on the energetics of proteins) at department seminars.

As a consequence, when I was asked to participate in the ACS Webinar, I was initially not phased by the opportunity. That is, until I learned that the audience would include nearly 400 participants. Fortunately, the ACS staff was similarly awesome. They provided all the necessary infrastructure and great user support. All I had to do was put my slides together just like I do for any other seminar. The inclusion of my industrial collaborator, Stephen Quirk, framed my otherwise academic discussion into one that was more accessible for a broader (viz. industrial) audience. Plus he did all the hard work of selecting the questions for me to answer during the Q and A. All-in-all my total time investment was probably less than four hours. Moreover, we reached a large audience and one that I probably would not have "seen" otherwise. That's a high benefit to cost ratio which I consider a big win.

If you missed my Webinar on "Digitally Pulling Proteins: Molecular Dynamics Simulations," you might still be able to hear it at http://acswebinars.org/digital-proteins. At present, it's available only for view by ACS members.