Pitching molecular fastballs through a hurricane 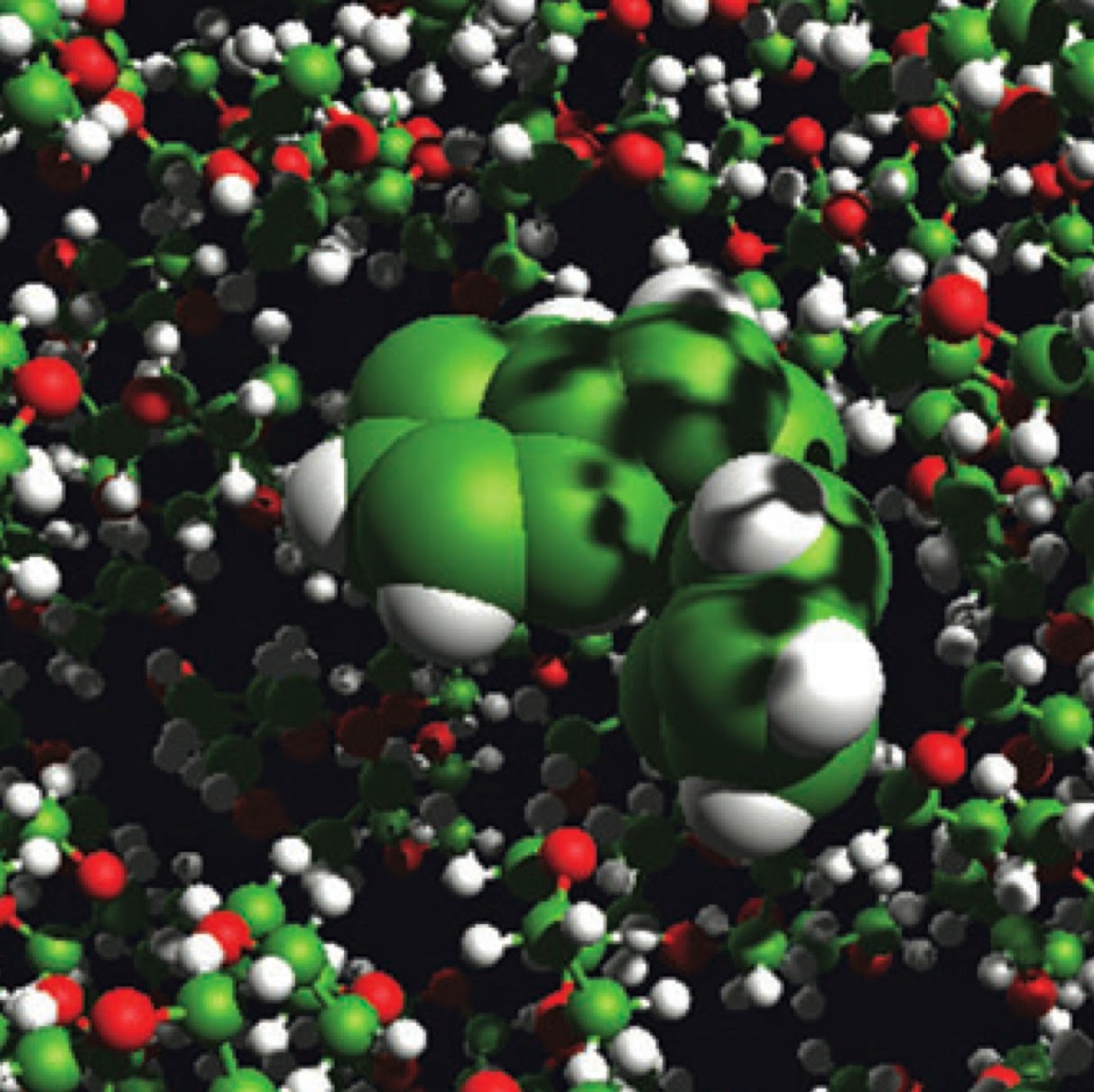 The first course I taught at Georgia Tech was a graduate course in statistical mechanics. I quickly discovered that a big barrier for my chemistry students was a lack of understanding of modern classical mechanics. Actually, this has also been a problem for them in learning quantum mechanics too. It might seem odd because classical mechanics is everywhere around you. It is simply the theory that describes the motion of baseballs, pool balls, and rockets. The details of the theory get amazingly complicated as you try to address interactions between the particles. Baseballs don't have such long range interactions so no worries there. But molecules do, and these interactions need to be included to understand the full complexity of molecules in classical (and quantum) mechanical regimes. In order to address this gap, I created a primer on classical mechanics that I have been sharing with my students ever since. But this document was not available to anyone beyond my classroom. So when I was asked to submit a review article on modern molecular dynamics, it was a no-brainier to include my primer at the front of the article so as to bring up readers up to speed on the classical equations of motion beyond Newton's day.

We didn't stop there, of course. The advanced review article, written with my collaborator, Dr. Alex Popov, also describes modern theoretical and computational methods for describing the motion of molecules in extreme environments far from equilibrium (like, for example, a hurricane). There are lots of ways in which this problem involves many moving parts (that is, many variables or degrees of freedom.). One of these involves the approximate separation in the characteristic scales of electrons and nuclei for which the 2013 Nobel Prize in Chemistry was, in part, awarded. Another involves the three-dimensional variables required to describe each atom in every molecule for which there usually are many. Think moles not scores. This increasing complexity gives rise to feedback loops that can explode (just like bad feedback on a microphone-speaker set-up), collapse or do something in between depending on very subtle balances in the interactions. Slowly, but surely, the scientific community is beginning to understand how to address these complex multiscale systems far from equilibrium. In our recent article, we reviewed the current state of the art in this area in the hope that it can help us and others advance the field.

The article was written in collaboration with Alexander V. Popov. The title is "Molecular dynamics out of equilibrium: Mechanics and measurables" and our work was funded by the National Science Foundation. It was recently made available on-line in WIREs Comput. Mol. Sci. 10.1002/wcms.1190, "Early View" (2014), and should be published soon.
Posted by Rigoberto Hernandez at 10:00 AM No comments:

LiCN taking a dip in an Ar bath 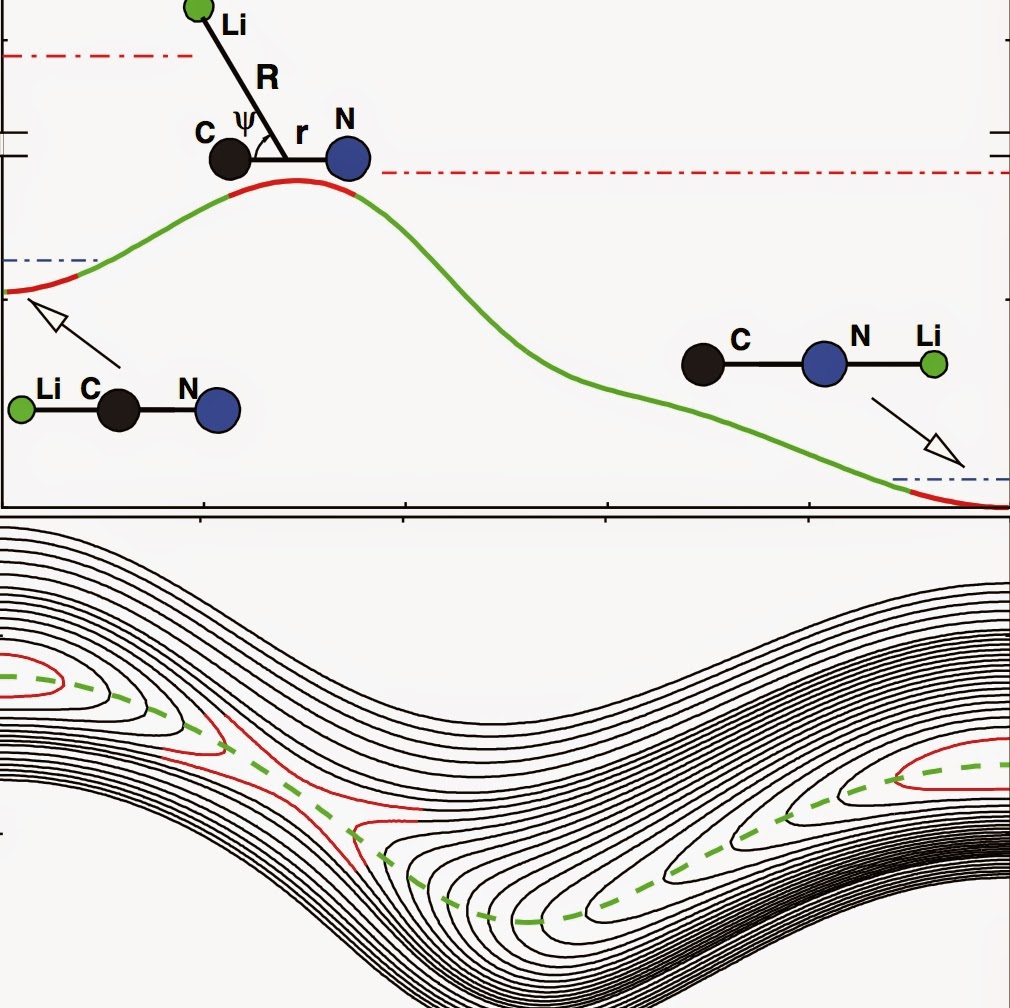 We all know that it’s easier to move through air than water. Changing the environment to molasses means that you’ll move even slower. Thus it’s natural to think that the thicker (denser) the solvent (bath), the slower a particle will swim through it. More precisely, what matters is not the density but the degree to which the moving particle interacts with the solvent, and this can be described through the friction between the particle and the fluid. Chemical reactions have long known to be increasingly slower with increasing friction. The problem with this seemingly simple concept is that Kramers showed long ago that there exists a regime (when the surrounding fluid is very weakly interacting with the particle) in which the reactions actually speed up with increasing friction. This crazy regime arises because reactants need energy to surmount the barriers leading to products, and they are unable to get this energy from the solvent if their interaction is very weak. A small increase of this weak interaction facilitates the energy transfer, and voila the reaction rate increases. What Kramers didn’t find is a chemical reaction which actually exhibits this behavior, and the hunt for such a reaction has long been on…

A few years ago, my collaborators in Madrid and I found a reaction that seems to exhibit a rise and fall in chemical rates with increasing friction. (I wrote about one of my visits to my collaborators in Madrid in a previous post.) It involves the isomerization reaction from LiCN to CNLi where the lithium is initially bonded to the carbon, crosses a barrier and finally bonds to the nitrogen on the other side. We placed it inside an argon bath and used molecular dynamics to observe the rate. Our initial work fixed the CN bond length because that made the simulation much faster and we figured that the CN vibrational motion wouldn’t matter much. But the nagging concern that the CN motion might affect the results remained. So we went ahead and redid the calculations releasing the constraint on the CN motion. I’m happy to report that the rise and fall persisted. As such the LiCN isomerization reaction rate is fastest when the density of the Argon bath is neither too small nor too large, but rather when it is just right.

The article with my collaborators, Pablo Garcia Muller, Rosa Benito and Florentino Borondo was just published in the Journal of Chemical Physics 141, 074312 (2014), and may be found at this doi hyperlink. This work was funded by the NSF on the American side of the collaboration, by Ministry of Economy and Competiveness-Spain and ICMAT Severo Ochoa on the Spanish side, and by the EU’s Seventh Framework People Exchange programme.
Posted by Rigoberto Hernandez at 10:00 AM No comments:

Taming the multiplicity of pathways in the restructuring of proteins 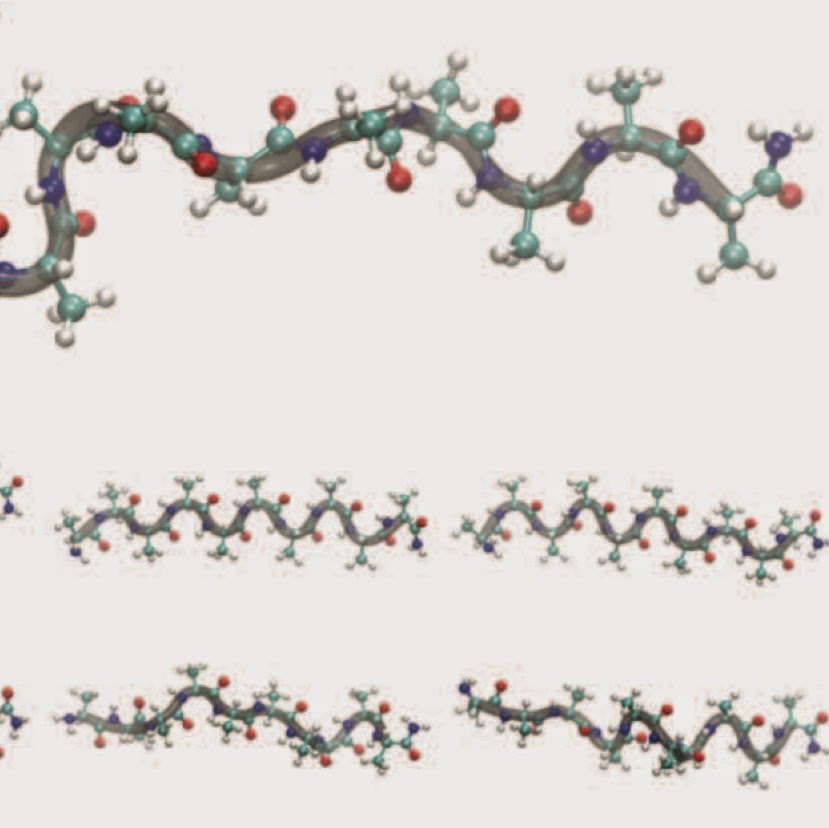 The average work to move molecular scale objects closer together or further apart is difficult to predict because the calculation depends on the many other objects in the surroundings. For example, you might find if easy to cross a four-lane street of grid-locked cars (requiring a small amount of work) but nearly impossible to cross a highway with cars speeding by at 65mph (requiring a lot of work.) When the system is a protein whose overall structure is expanded or contracted, there exist a myriad possible configurations which must be included to obtain the average required work. Such a calculation is computationally expensive and likely inefficient. Instead, we have been using a method (steered molecule dynamics) developed by Schulten and coworkers based on Jarzynski's equality. It helps us compute the equilibrium work using (driven) paths far outside of equilibrium. The trouble is that the surroundings get in the way and drive the system along paths that get out of bounds quickly.

In previous work, we tamed these naughty paths by reigning them all in to a tighter region of structures. Unfortunately, this may be too aggressive.  The key is to realize that not all paths are naughty. That is, that there may be more than one region of structures that contribute significantly to the calculation of the work. We found that we could include such not-quite-naughty paths and still maintain the efficiency of our adaptive steered molecular dynamics. I described the early work on ASMD in my recent ACS Webinar.

This research project was truly performed in collaboration. My recent graduate student, Gungor Ozer, did the work while he was a postdoc at Boston University. Tom Keyes hosted him there and gave great insight on the sampling approach. Stephen Quirk, as always, grounded us in the biochemistry.

The title of the article is "Multiple branched adaptive steered molecular dynamics.” The work was funded by the NSF. It was just released at J. Chem. Phys. 141, 064101 (2014). Click on the JCP link to access the article.
Posted by Rigoberto Hernandez at 1:00 PM No comments: 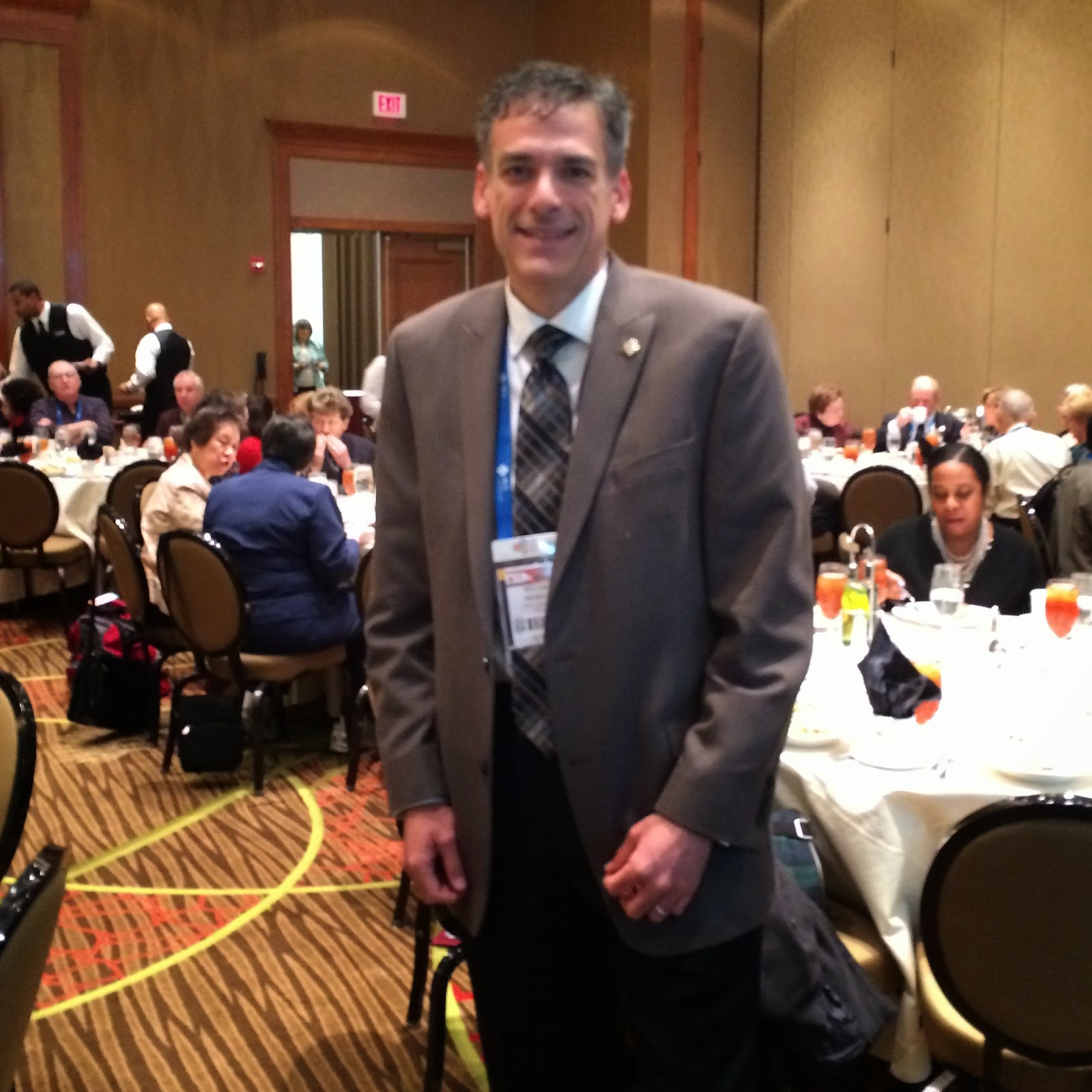 Life is full of cycles. For the American Chemical Society (ACS), there’s a National Meeting held every 6 months. With that as my time constant, it feels as if it was just the other day that I gave the Keynote Lecture at the ACS Committee on Minority Affairs Luncheon at the last National Meeting in Dallas. Last March, I framed my remarks through the title of this post. I knew that it was a good title because my wife liked it. But she also wondered what in the world I would talk about under such a title. This seemed fortuitous. It meant that I could say nearly anything without disappointing the audience. After all, they couldn't possibly have any expectations. In truth, the title wasn’t advertised as evidence by the large turnout.

What is lost in the projection of how others frame you? That is, there is a potential disconnect between what others expect of you and the person who you believe yourself. To what extent are you bound by what others expect of you? Such expectations may arise from how others have seen you in the past or perhaps by who they see on first impression. I came to the United States as a child, a Cuban immigrant who spoke no English but proud to be able to count from one to ten without too much of an accent. Children grow and learn so surely I cannot be bound by that early frame. As adults, we may not grow physically, but we also learn. And yet, we have a tendency to hold others to the frames that we first see of them. Even more dangerous to each of us is the fact that the frame is often projected onto us by others, and not always correctly. There were several young scientists in the room. During the question and answer period, they echoed the angst of having felt bound by such projections in the past. I hope that I succeeded in encouraging them to find their way in breaking those projections and choosing their own frame.

The cycle continues this weekend with the start of the ACS meeting in San Francisco. If you are here, I encourage you to go to Monday’s CMA Luncheon where Madeleine Jacobs will be speaking. The issue of implicit bias and the effects that has on academic careers will also be a large piece of the Symposium on Advancing the Chemical Sciences Through Diversity to be held at the Hilton San Francisco Union Square Hotel all-day on Tuesday. I hope to see you there!
Posted by Rigoberto Hernandez at 3:00 PM No comments: