If chemists don't dream of sushi, then what do they dream of? 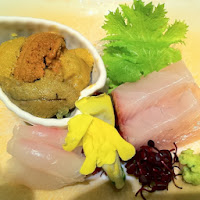 If you've got $300 and 15 minutes to spare, then there may be no better place to use both up at the same time than Jiro Ono's restaurant in downtown Tokyo. It's omakase, which means chef's choice and is roughly equivalent to prix fixe. Sukiyabashi Jiro is known for ultra-high-quality ingredients and perfect execution of sushi. Jiro's plating is also fast. (The 10 seats at the bar are said to turn over every 15 minutes though I haven't had a chance to confirm it. The twenty "courses" definitely come lightning quick.) The movie, "Jiro Dreams of Sushi," didn't quite emphasize such cold precision in romanticizing his artistry and drive for excellence. Nevertheless, I see all such traits in most successful chemists. Sadly, I have not been to Sukiyabashi Jiro. But I do know quite a few awesome chemists, and have had a chance to see them practice their craft with similar creative precision.

I wonder what other chemists dream about if not Jiro's sushi? The shape of a nano crystal, the reorganization of atoms through synthetic steps, the dance of symbols in mathematical equations, teasing out the composition of an unknown object, or something else entirely. I dream about how each part of a molecule or a material makes the whole while still remaining a part. Each element is a building block and yet its action is modified by the atoms it is attached to. Putting many molecules together gives rise to so-called emergent behavior in which the collection of molecules together acts entirely differently than any one molecule within. The problem is predicting how it will act (its function.) Their motion and the equations that orchestrate them is what I dream about.

But I also dream about eating perfectly selected and constructed sushi. Perhaps, I'll have a chance to eat at Sushi Nakayama in NYC? Its eponymous chef was Jiro's apprentice. At the very least he can make tamago as good as what you get at Jiro's. Trouble is that Nakayama's 10 bar seats are about as hard to get as Jiro's. So I'll have to stick to hanging out with chemists.

Posted by Rigoberto Hernandez at 7:00 AM 4 comments:

Email ThisBlogThis!Share to TwitterShare to FacebookShare to Pinterest
Labels: complex environments, emergence, mentoring, outside the lab 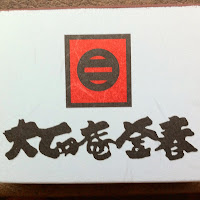 While in Japan, I was initially shocked to see the popularity of ramen noodle shops. I remember ramen as the dried stuff (in a bag or cardboard box) that you add water to for a quick but very salty meal. Adding further to my surprise, I subsequently ran into this month's article in Delta magazine on ramen noodles! Apparently, ramen has all grown up and its the latest trend. In New York, you can have a bowl at Momofuku if you are able to brave the wait. I haven't been to Tokyo to confirm the article's claim that Ramen was formed in the early 1900's out of a fusion of Japanese and Chinese cuisines. However, I believe my hosts in Sapporo who exclaimed that ramen was truly invented in Hokkaido. Regardless, there is no question that the ramen dishes available in different parts of Japan are different, and all are very good!

In addition to resonating with the idea of interdisciplinarity, ramen offers another metaphor to chemistry. The recipe is a basic protocol but a given dish is as interesting as your imagination. You choose a solvent, add porous solids with lots of surface area, and complete it with other solids to change the overall color and nutrient composition. From that basic recipe, you can make countless combinations. At the simplest level, chemists just put chemicals together (following an appropriate protocol) to make still other chemicals. The genius of it lies in knowing what's going to come out (and how to extract it) so that it can be of use. And that's just like the premier ramen chef who knows just which combination of items will make tasty ramen.

Posted by Rigoberto Hernandez at 12:30 PM No comments:

Email ThisBlogThis!Share to TwitterShare to FacebookShare to Pinterest
Labels: interdisciplinary sciences, outside the lab, travel 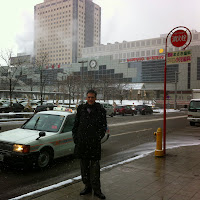 Cars drive on the left side of the road, but power outlets are 110V (generally close enough to 120V for most U.S. products to work) using ungrounded (2-pin) North American plugs. Hotels generally don't have fitness rooms, and if they do, they are aimed at leisure travelers opening well after your business meeting will start. Hotel breakfasts are awesome, often including a mix of western and Japanese items (without missing any from either cuisine.) Only downside is that it makes you miss the fitness room even more. Traveling through Japan is relatively easy because most locations are labeled in latin script. Bus and rail ticket vending machines always offer an English option. Nevertheless, there are invariably surprises. The good news is that service providers really do want to help. Indeed, the level of politeness is like white noise. It feels wrong only when it's not there. Surprisingly, everyone takes it for granted, rarely acknowledging the bows and the various statements of "domo origami gozaimasu" offered multiple times any time you go near (let alone interact with) a service person. Whenever possible, just say "domo." It means please and/or thank you. Most importantly, it conveys an acknowledgment that you are ready to treat the person in front of you like a human being.

I was lucky to have local hosts to make many of the steps work without having to fumble through them. I suppose that part of traveling like a scientist is that you have scientific friends wherever you go. The other part of traveling like a scientist is that you use the scientific method in figuring out how to use some common appliance or in facing whatever obstacle you encounter. For example, when I was setting up the projector for my talk, I was faced with a remote control whose buttons were entirely in Japanese. There had to be a button that turned it on and another that would switch the mode to the VGA input. The former was easy: it was the big red button. The latter was trickier but limited to a few likely candidates based on pattern recognition with US remotes. A little trial-and-error and, voila, my presentation was ready to start. I guess I could have waited for my hosts to do this, but after all their kindness, I wanted to give them one less thing to do. We could then move sooner into the purpose of my visit: discussing our latest scientific results, and using them to enable each other's next scientific advance.
Posted by Rigoberto Hernandez at 6:00 AM 3 comments: 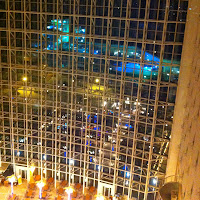 I was asked to make the final remarks at the end of the banquet of the recent 14th RIES-Hokudai Symposium.* Quite an honor, but also a lot of pressure. One thing I've learned over the years is that humor rarely translates, and it's easy to accidentally offend in a foreign language. My only saving grace was that the expectations were low. The symposium theme is "mou" —meaning networks— and that presumably had to be weaved in too.  So what to say?

I started by saying "Minasan Konichiwa." That got a round of applause. Proof that the expectations really were low. But here's the kicker: I asked Professors Tsuda, Nakagaki and Ohta, in turn, to say "campai." Each did so but at a sound level that was barely audible. I then asked all three to say "campai." The volume of sound was not the sum of the three earlier statements which would have remained barely audible. Rather, it was loud enough for all to hear easily. This little experiment involving a social network with sound as the observable is indicative of a non-additive (nonlinear) emergent phenomenon. I did not tell my three participants that I planned to ask them to do this. So I really got lucky that the experiment worked as planned. In so doing, though, I was able to provide an example of emergent function arising from collective (network) behavior in a way that most of the audience was able to appreciate and toast to. It also served as a basis for the seminar I delivered the following day on the emergence of structure from Janus and striped particles. Campai!


*Check out my recent post on the 14th RIES-Hokudai Symposium here. RIES is the Research Institute for Electronic Science at Hokkaido University.
Posted by Rigoberto Hernandez at 7:00 AM No comments:

The chemistry within networks 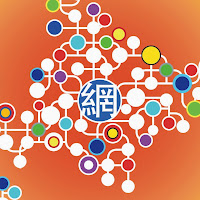 On December 11 and 12, my friend, Tamiki Komatsuzaki, organized the 14th RIES-Hokudai Symposium in Sapporo, Japan. I was lucky to be invited to present our work. I would argue that all the speakers were similarly lucky. The symposium was a gathering of representatives from disparate fields and several countries. While there, I learned that "Hokudai" itself is a fusion of Hokkaido and Daigatsu (university in Japanese).

At the RIES-Hodukai Symposium, we were brought together under the unifying theme of networks (mou in Japanese.) Network theory is fast growing into its own independent field, but it also serves as an interdisplinary glue connecting mathematics and computing to nearly everything. As such, the speakers spoke about transportation, nanoparticles, organic synthesis, cells, et cetera. The theme is also a double entendre. One intent of the workshop is to create a stronger human network between its diverse participants. This resonates with Prof. Kohei Tamo, the current President of the Chemical Society of Japan: “I often advise young researchers to make 100 friends at the expense of one paper." Of course, the network doesn't help if you don't have the papers (and the results they represent.)

It was exciting to see and participate in this effort urging us all to think about science broadly and across international lines. Hats off to Japan for supporting this!
Posted by Rigoberto Hernandez at 8:30 AM No comments: