Reimagining the geometry of transition states (in PRL!) 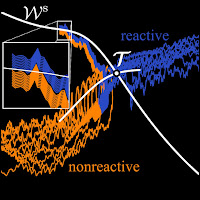 I'm excited to report that my former graduate student, Dr. Galen Craven, and I just published an article in Physical Review Letters (PRL). The critical question in determining the rate between chemical reactants and products relies on knowing when exactly the reactants become products. This is like asking yourself when did you get sick? You might remember when you were healthy and you know when you definitely have a cold, but do you know when you transitioned from being healthy to sick? Presumably, if you could know when this transition happens, then you would know when to take medicine or when not to. For example, if you start feeling a little off but you haven't hit the transition to being sick, you might still not get sick at all and so there would be no need to take a pre-emptive medication. In the same way, chemists need to know when molecular reactions really take place and when exactly they did so. Transition state theory then provides a way to use that transition to obtain the rate of a reaction. And that's also useful because then we know if it will take place in the same time scale as other events such as being fast enough to finish while you are on a quick break or so slow that it won't happen before the universe has ended.

Specifically, we discovered a new way for obtaining the structure of the transition state between reactants and products when the reaction is in a complex solvent. All of the previous methods had obtained this surface by optimization (using variational transition state theory) or through successive approximations (using perturbation theory).The key is a mathematical tool, called the Lagrangian descriptor, that had been developed earlier by Wiggins and his colleagues in the area of fluid mechanics.We were able to use the Lagrangian descriptor to obtain the transition state geometry directly without either optimizing the rate or employing perturbation theory. And this means that we now have a new tool for obtaining reaction rates in nonequilibrium systems.

As with most articles in PRL, it was a tortuous path through the reviewing process. We were pleased that nearly all of the reviewers (and we had 6 in the end!) saw the work as novel and potentially game-changing. The full reference of the article is: G. T. Craven and R. Hernandez, "Lagrangian descriptors of thermalized transition states on time-varying energy surfaces," Phys. Rev. Lett. 115, 148301 (2015). (doi:10.1103/PhysRevLett.115.148301) I'm happy to acknowledge the support from the Air Force Office of Scientific Research (AFOSR).
Posted by Rigoberto Hernandez at 2:00 PM 3 comments: