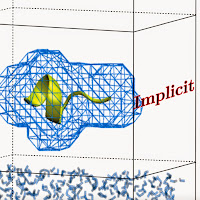 I'm not sure where to side on the Open Access (OA) publishing business. On the one hand, paying for an article to be published is a regression to the days of page charges albeit without the double-bind that readers are also required to pay. On the other hand, it does flatten access to the article, and often panders to enlightened self-interest by way of increased exposure and citations. Indeed, a strong argument in favor of OA for articles, data and code was just published in the Journal of Chemical Physics by my friend, Dan Gezelter. (Fortunately his Viewpoint is OA and readily available.) Regardless, publishers need to cover their costs, and here lies the challenge to the scientific community. The various agencies supporting science do not appear to be increasing funding to subsidize the fees even while they are making policy decisions to require OA. Libraries love OA because it might potentially lower their skyrocketing journal costs, though no substantial lowering appears to have yet occurred. Long story short, my group is now doing the experiment: We recently submitted and just published our work in PLoS (Public Library of Science.) Props to them for being consistent as they also required us to deposit our data in a public site. I was also impressed by the reviewing process which did not appear to be lowered in any way by the presumed conflict-of-interest that a publisher might have to accept papers (and associated cash) from all submissions. The experiment continues as I'll watch to see how our OA article fares compared to our earlier articles on ASMD in more traditional journals.

Meanwhile, we are excited about the work itself. My students, led by outstanding graduate student, Hailey Bureau, validated our staged approach (called adaptive steered molecular dynamics, ASMD) to characterize the energies for pulling a protein apart. The extra wrinkle lies in the fact that the protein is sitting in a pool of water. That increases the size of the calculation significantly as you have to include the thousands (or more) of extra atoms in the pool. The first piece of good news—that we had also seen earlier—is that ASMD can be run for this system using a reasonable amount of computer time. Even better, we found that we could use a simple (mean-field) model for the water molecules to obtain nearly the same energies and pathways. This was a happy surprise because, for the most part, the atoms (particularly the hydrogens) on the protein appear to orient towards the effective solvent as if the water molecules were actually there.

Fortunately, because of OA, you can easily read the details online. The full reference to the article is: H. R. Bureau, D. Merz Jr., E. Hershkovits, S. Quirk and Rigoberto Hernandez, "Constrained unfolding of a helical peptide: Implicit versus Explicit Solvents," PLoS ONE 10, e0127034 (2015). (doi:10.1371/journal.pone.0127034) I'm also happy to say that It was supported by the National Science Foundation.

Posted by Rigoberto Hernandez at 7:00 AM No comments:

Monthly Status Reports (A random walk through how I run my lab, Item 4) 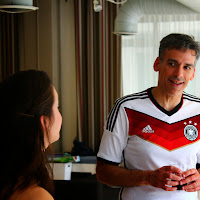 In the business world, or in "Office Space," everyone has seemingly heard of the TPS that must be submitted to your boss at arbitrary (but far too often) frequency. More annoyingly, the TPS often appears to remain unread serving only to occupy one's time with busy work. So it is with ironic amusement that I rediscovered this tool so as to improve the efficiency of my lab. After all, theorists are out-of-the-box thinkers who don't want to be constrained by the mundane, right? And yet this monthly task is exactly the extra structure my students needed to maximize their progress, liberating them to not even see the "box."

For nearly two years, I have asked my students to submit a Monthly Status Report (MSR). It includes only four components: accomplishments, accountability, goals, and pain-points. The goals include not just what is to be done in the next month, but also their overarching plans. In accountability, they summarize what was performed with regards to the previous month's goals. If they succeeded with all of their goals, then that serves to calibrate a more ambitious plan for the following month! The pain-points provide a quick summary of which items I might need to help them with or which I am overdue on. (Yes, I also need help keeping all the balls in the air!) The MSR needs to include items regarding their educational plan, and not just their research projects. To this end, I ask them to include a running clock of the time spent as a graduate student or postdoc. The clock increments by one month each time, of course. The total number, though, reminds us to track professional development activities appropriate to the student's educational timeline. The key to insuring that this is not a totally pointless exercise is that the MSR is followed by a 1:1 thirty-minute meeting discussing progress and charting out meetings and tasks for both student and me to follow up on. I've found that this "meta" meeting is critical to ensuring that both the student AND her or his projects succeed. When I had a smaller group, the MSR wasn't necessary, but now it's critical. I have found it to be more effective than the annual Individual Development Plan (IDP), if the latter is done exclusively, because the IDP is yearly and that feedback isn't often enough. Indeed, the MSR makes the IDP easy for students to complete and increases the effectiveness of the IDP.

Again, the MSR is a simple tool from business school 101, but don't scoff it if you want to help your students increase their productivity and maximize what they learn in graduate school. The key is to use it as a vehicle to hold a frequent and periodic conversation between you and every one of your students!

Posted by Rigoberto Hernandez at 11:00 AM No comments: