Video Segment on my Candidacy for District IV Director 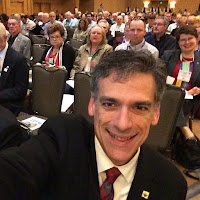 This Fall, I am running to continue into my second term on the Board of Directors of the American Chemical Society (ACS). As part of our effort to communicate with members, a 2-3 minute video segment of me discussing my vision for the ACS was just recorded today. I'm including the transcript of that statement below so as to give you a spoiler for the video! Feel free to send me your thoughts and suggestions for increasing the value of the ACS to you and chemistry broadly. If you are a member of the ACS and a member of District IV (roughly in the SouthEast of the US), I would also very much appreciate your vote!

The most important element in ACS membership is you. Together we form a personal and professional chemistry network that we all leverage to advance our careers, each other, and chemistry as a whole. Through ACS we celebrate the technical and human sides of chemistry, and both must be diverse.

The challenge lies in continuing to adapt our structure and our offerings to best serve the broad needs of hour fellowship. This is a challenge that cannot be solved once and for all because we and the world around us are constantly changing. The opportunity for advancing the interaction and support of chemical scientists like you is what drove me to volunteer to serve as District Director, and it is why I would like to continue for another term.

I have focused on three of ACS’s core values: The value proposition of ACS membership, Education of the chemical workforce, and Science advocacy. The diversity in age, experience, backgrounds, world-wide location, race, ethnicity, gender identity and orientation, and special abilities that makes our fellowship stronger must be addressed through everything we do. My championing of diversity equity on task forces, boards and as the OXIDE Director demonstrates my strong commitment to advancing these critical issues within the chemical workforce. As a Director, I have spoken with many of you at regional and national meetings. I have written several comments in C&EN, promoting diversity equity and inclusive excellence, the integration of teaching and research, and advocacy for public understanding and financial support of the chemical sciences.

The ACS promotes and advances chemical science and innovation through its on-line platforms, journals, abstract services, conferences, and more. The ACS is also here to help you and all of its members grow professionally through our myriad of educational offerings. All of these programs and offerings are critical in establishing a marketplace of ideas to which you as a member have a privileged entrée while benefiting from the broad scope or our large membership. As a member-driven society, none of these things can happen without you. So I ask that you join me in advancing our society. Contact me electronically or personally through the links at tinyurl.com/hernandez4acs follow me on twitter at EveryWhereChem, or read my posts at EveryWhereChemistry.blogspot.com. VOTE for me, Rigoberto Hernandez, so that I may work with you and our fellow members to advance your ACS.


Posted by Rigoberto Hernandez at 12:00 PM No comments:

Diversity in the Marketplace of Ideas 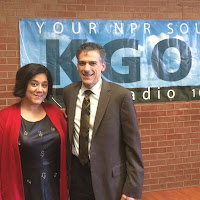 During my Phi Beta Kappa visit to University of Oklahoma back in late March of this year, my host Ron Halterman added a somewhat unusual meeting to my visit. Namely, he arranged for me to go to a recording studio at the local NPR station, KGOU. While there, I had a conversation with Paige Willett Lough and Merleyn Bell on the work that I’ve been doing to promote diversity equity in chemistry through OXIDE. In much less than an hour, they recorded enough material to produce a 30-minute show as part of their Race Matters series. At first, it wasn’t clear to me who was more nervous, Merleyn or me. I’m pretty sure that it was me, and Merleyn pretended to be so just to make me adjust to the fact that I was staring at a very large microphone. In any event, it was fun to have a conversation about diversity equity and science advocacy, and I thank Ron, Merleyn and Paige for making that happen!

A 30-minute conversation includes a very long narrative that is too long to reproduce here, but I can highlight a few of the points to hopefully peak your interest. (Or you can just use this as your “cliff notes” so as to avoid going further!) The notion that we as scientists are competing in a marketplace, not of physical products, but of ideas is one that intrigues me. We develop and disseminate ideas but it’s hard to own or sell them. Yet it costs money to produce and maintain them. That money comes from the federal government or student tuition, for example. It leads to solutions and products that we all use and pay for. So it’s definitely a marketplace which has real value. For us to remain competitive in this marketplace of ideas, we need to have a diverse cohort of scientists, and this notion frames several of the segments of my discussion. Indeed, it is the need for us to remain competitive in science that drives OXIDE in its work to diversity the faculties in chemistry departments across the US. As a community, we have made significant advances in changing our policies and procedures to advance our climate, and I provided several specific examples. Meanwhile, Merleyn also asked me about how I encourage young people to be scientists. I hope that I do this by example, and by actively engaging and mentoring students when I visit colleges and universities. But scientists need help from the media to amplify our message. To this end, I mentioned that the theme in the “The Martian” —in which science was used frequently as the key to solve his challenges— is a great example of the media promoting science, and not just innovation.

Please check out the show by listening to the recording or reading the transcript here.

Posted by Rigoberto Hernandez at 11:30 AM No comments: