On celebrating my 11th and last Herty Medal Dinner as Host 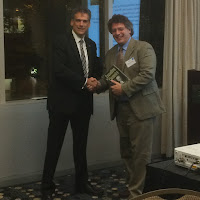 The Georgia Local Section of the American Chemical Society has a deep history in recognizing research and service toward the advancement of chemistry in the nation’s service. The first of the Herty Medals was awarded in 1933 to Fred Allison. Charles Herty was honored with the award in the following year. As of September 16th of this year, we have now awarded 82 gold medals to deserving chemists in the southeastern United States. The most recent Medalist was Prof. Brooks Pate from the University of Virginia who was recognized for "his work in revolutionizing molecular rotational spectroscopy and its applications in astrochemistry and analytical chemistry and for his service in mentoring diverse students through a summer undergraduate research program.” His seminar illustrated how his key insight of spectral theory allowed him to develop an approach for capturing the spectra in a single experiment rather than using a series of single frequency measurements. The speed and accuracy of this technique has played a key role in reimagining the field of astrochemistry.

On a personal level, I was pleased to see Brooks again after we had been lab mates in Kevin Lehmann’s laboratory at Princeton. I was an undergraduate while I saw him sail through his candidacy exams. On a different personal level, this most recent Herty Medal dinner also marked the eleventh and last dinner for which I chaired the corresponding selection committee. The list of nominees is outstanding and this made settling on a finalist all the more difficult each and every year. Nevertheless, with the able help of my committee colleagues, we developed a process that allowed us to sort through the nominees carefullly and thoughtfully. We pre-screened all of them electronically prior to our in-person meeting. The two- to three- hour discussion led to a deeper understanding of the candidates, and often resulted in a final choice which our individual assessments had rarely predicted. During my term as Chair of the Herty Medal Selection Committee, we also had the opportunity to do up the 75th Herty Medal celebration. For the fist and only time, we have nearly 15 Herty Medalists return to Atlanta to commemorate them and chemistry in the Southeastern United States. We staged several one-time activities reaching out to students and professionals of all ages. We founded the Herty Medal Undergraduate Research Symposium (HMURS), and it continues to support our Section’s diverse undergraduates. I am thus very proud of what our Section has accomplished, and thankful to the section for letting me be a part of it. I also look forward to celebrating the 100th Herty Medalist in 2034. Mark your calendars now!
Posted by Rigoberto Hernandez at 6:00 AM