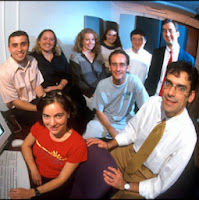 Last Tuesday, we staged Theoretical Chemistry Day at Georgia Tech. As the School of Chemistry and Biochemistry was footing the bill, we limited the local faculty featured in the program to essentially those within our Center of Computational Molecular Sciences and Technology (CCMST). This sadly excluded a number of faculty members who are card-carrying theoretical chemists but are located in other schools such as Chemical and Biochemical Engineering, Biology, Materials Science and Engineering, Physics, etc. Nevertheless, the five of us, Jean-Luc Brédas, Angelo Bongiorno, Ken Brown, Rigoberto Hernandez (me), and David Sherrill, comprise a fairly large theoretical and computational chemistry subgroup in comparison with others around the country. The plenary talks by exemplary guests, Roald Hoffman, Peter Rossky, George Schatz, Josef Michl and Mark Ratner, provided a highlight to draw the attention of the campus for the day (as was the intention.) Meanwhile, the activity of the CCMST scientists and students is led by our insiders, and continues every day.

The CCMST started back in 2000 founded by David Sherrill and myself. Our then Vice-Provost for Research, Charlie Liotta, made a large bet on these two Assistant Professors in matching a Shared University Research Grant from IBM to help us bring a large supercomputer (an IBM SP2) as a cornerstone of the center's resources. We were also lucky to hire Edward Valeev as our first CCMST Scientist. (He's now an Associate Professor at Virginia Tech!) Our primary priority has always been to maintain a stable platform allowing computer jobs to run for a long time (like months to years!), and to continue executing through upward compatibility whenever possible. In parallel with the founding of the CCMST, Jean-Luc Brédas (then at U. Arizona) was also awarded an SP2. It was natural to have a merger of our HPC resources in expanding the CCMST in 2003 with his arrival. Since then, we have secured two different NSF Chemistry CRIF grants allowing us to add a few more newer clusters. We also grew to include two additional faculty members, Angelo Bongiorno and Ken Brown.

The funny thing about this story is that none of us were here 17 years ago. Indeed, at the time that I arrived, there were no full-time theory and computational professors in chemistry. It should be surprising that we went from essentially zero to a national presence in theoretical and computational chemistry in that little time. After all, it's the strength of the faculty in rejuvenating itself that typically maintains its rankings. Our recipe for success is simple. Mostafa El-Sayed, though he is an experimentalist, identified theory and computational chemistry as a critical growth area for our school and made it his mission to make it happen. I like to think that he was right!

Posted by Rigoberto Hernandez at 7:00 AM